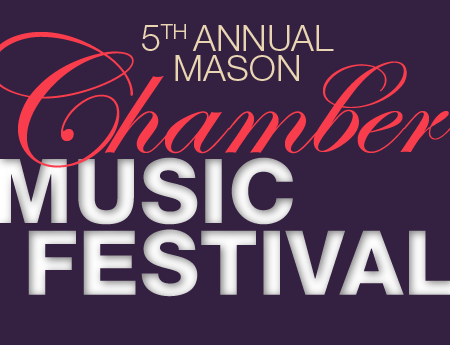 In this, the fourth season of the MCMF, it is important to remember the chain of events that led to the creation and continuation of this Festival.  The tangible history of the MCMF started in 1994 when the Odeon Preservation Association was formed, took out a loan, and bought the Odeon Theater.  To help pay back that loan, and to raise funds for renovations, the OPA organized countless fundraisers and began presenting occasional live music events.  The Studebakers had the honor of being the first band to perform in this historic building.  Patrons brought their own folding chairs in those early days.

About 19 years ago, Los Angeles studio musician Scott Haupert moved to Mason to start a winery.  He had a dream to continue performing by creating a local classical music festival.  He shared this idea with friends including Spider Johnson but realized the timing wasn’t right.

In April of 2009, the OPA began presenting a Concert Series.  The first guest artist was a Flamenco guitarist and for the next six years, the performances consisted of a variety of artists.  However, there were never any classical ensembles.

In the Fall of 2014, the Artisan Quartet was contacted by their friend Melissa Eddy, now a member of the festival committee, about an organization in Mason, Texas called the Odeon Preservation Association.  She mentioned the OPA’s Concert Series, and for the first time, the OPA was interested in presenting a concert of classical music… possibly a string quartet.  It seemed that a great many OPA concert-goers were more than ready for such an event, as the Artisan Quartet was soon to discover.

Dennis Evans, OPA Vice President, and concert booker, was contacted, a date chosen, and the Quartet was engaged to perform at the Odeon on May 2, 2015.  It was also at that time that Dennis told the Quartet about Scott Haupert and his musical background.  Dennis thought it would increase interest if Scott were invited to perform with the Quartet.  Scott’s history in the music business is rather impressive, and as the Artisan Quartet is always interested in collaboration (and selling tickets), they agreed.

About four years ago, the Artisan Quartet and Scott were preparing for the May performance in Mason.  The AQ was very impressed with Scott’s outstanding musicianship. He fit right in, and all five musicians were looking forward to a nice concert experience.

On May 2, 2015, the AQ with guest artist Scott Haupert, played a concert of Mozart and Brahms at the Odeon Theater to a sold-out house (at least 50 people were turned away). The performance was wildly successful by any account.

At the reception, hosted by Sandstone Winery, many audience members approached AQ members with the same reaction… extreme enthusiasm and gratitude for the performance they had just attended!  The AQ had arrived in Mason on Saturday to play a nice concert and departed on Sunday thinking something very special had just happened. They decided they had to play for the people of Mason again!

Here the narrative is taken up by Bruce Williams, violist and manager of the Artisan Quartet and Artistic Director of the Mason Chamber Music Festival.

One week after the Artisan Quartet’s hugely successful performance at the Odeon Theater, I traveled to Fayetteville, Texas (population about 250), and for one week I lived and played at the Fayetteville Chamber Music Festival.  It was my first invitation to play at this festival that brings in world-class musicians to live and perform in a town less than one-tenth the size of Mason!  As I was living the dream life of a musician for a week, I could not help but recall our wonderful new friends and music-lovers in Mason.  That week I started writing my proposal for the Mason Chamber Music Festival.

On July 20, 2015, I attended an OPA Board meeting to present my proposal for a chamber music festival in Mason.  OPA Board members listened to me politely, thanked me, and said they would let me know.

In mid-August 2015, I was on vacation in Utah when I got a call from Dennis.  He told me the OPA had accepted my proposal and even had a chairperson selected for the festival committee!  Cathy Terrell volunteered to take on this rather significant position, and she soon recruited new members to be on the Festival Committee.

On September 21, 2015, the Festival Committee met for the first time.  A fundraising letter, a grant application to the Texas Commission for the Arts, and marketing strategies were among the topics discussed.  The Committee began receiving monetary support almost immediately after the fundraising letter was mailed, and in December the Committee applied for the grant.  Several people contributed to help write the application, and Melissa Eddy edited and submitted the document to the Texas Commission for the Arts. The application was successful, and the MCMF received a grant from the TCA to help fund the inaugural season.

Music was made for the first time at the Mason Chamber Music Festival on February 17th, 2016.  A Salon Concert and reception at the home of Scott Zesch, featuring the Artisan Quartet, raised funds and treated the audience to great music, great food and wine, and a great sunset!

On March 31, 2016, the Mason Chamber Music Festival officially began with a performance for Mason’s youth at the Mason High School.  Close to 300 students attended including most of the elementary school. The Festival continued that weekend with free concerts at the Mason County Courthouse, the First United Methodist Church, and the Gala concert at the Odeon on Saturday evening.

History of the Odeon Theater

The Odeon Theater, built in 1928, is the longest continually operating theater in west Texas. The building, located on Mason’s beautifully refurbished Courthouse Square, is in a National Historic Register District. Mason is the home of Fort Mason, one of the original forts built to guard Texas frontier settlements during the mid-nineteenth century.

In 1957, the Odeon was the site of a special premiere showing of the Disney movie “Old Yeller,” based on the book by Mason native, Fred Gibson. Also, the Odeon was the site of the worldwide premiere of a second movie, “Savage Sam,” based upon another of Mr. Gibson’s books. From this small community in the Texas Hill Country, Gibson’s books, and the movies based on them have entertained many in numerous countries, in various languages.

In 1994, the building owner, Terry Hooten, announced his plan to level the sloping theater floor and use the building as a conventional business location. Local residents, including many Mason school children, objected to the closing of the theater and conversion of the building. The Odeon had been a safe source of entertainment for many years; and, many believed the building itself had a much too colorful historical past to become anything other than a “movie house.” At that time, Jane Hoerster, Mason County Treasurer and president of the Mason County Historical Commission, stepped in to preserve the Odeon. Jane approached local artist, Spider Johnson and urged him to organize local support for preservation of the Odeon. Their efforts resulted in the formation of the Odeon Preservation Association (OPA), a private, non-profit 501(c)3 corporation. In 1994, the newly formed OPA purchased the Odeon Theater from Mr. Hooten with a loan from Mason National Bank. 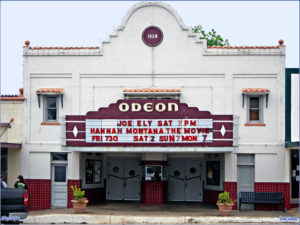 In addition to preservation and renovation of the Odeon itself, the main goal of the OPA has been to provide local entertainment and cultural facilities for the residents of Mason County and surrounding areas. For years, the Odeon was the only movie theater in a four-county area. Travel distances for movies, live theater or musical events were too great for many less advantaged households to afford. Mason citizens recognized the need to maintain the Odeon for these purposes and generously volunteered both financial support and elbow grease.

The building, while largely intact, needed many repairs. The exits, restrooms, seating, and electrical system needed to be modernized to meet fire/safety codes ad the heating and air-conditioning systems needed replacement. The sound and projection systems were usable, but inadequate for long-term goals and live performances; the stage needed to be enlarged and repaired for live theater productions. Also, residents attending the movies were instructed to “BYOC” – bring your own chairs.

Since 1994, the OPA Board of Directors has continued its mission of providing entertainment at the Odeon through the performing arts, thus bringing cultural enrichment to Mason and surrounding communities. Current releases of movies are shown every week, as they have been since the Odeon first opened in 1928. Live musical performances grace the stage on a regular basis. The Odeon serves as a venue for film festivals; it collaborates with the M. Beven Eckert Memorial Library in presenting educational/public service programs and has served as a venue for seminars presented by the Mason County Historical Commission. 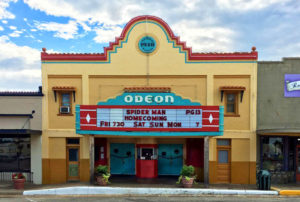 A new chapter in the history of the Odeon Theater will begin in 2018 with a newly completed addition that makes possible live community theater in Mason. New dressing rooms, work areas for set design and construction, and a much-needed storage area will allow the OPA to accomplish another of its long-term goals. The new addition will be completely accessible to people with disabilities and will provide cultural opportunities otherwise unavailable to those of limited economic means. And, a recent grant from the Riata Service Organization has provided funds for a new face-lift for the lobby and concession area.

The Odeon Theater has come a long way from the days of “BYOC.” Theater attendees now enjoy presentations with state-of-the-art projection, lighting and sound equipment. In 2019, the OPA celebrates its Silver Anniversary. To mark this exciting milestone, the Odeon is completing the final major elements of the original restoration plan — new, modern, comfortable theater seating and updated sound system!

Renovation and preservation of the Odeon has been possible only through the generous support of over 400 individuals, businesses and granting agencies. Major support has come from the Meadows Foundation, Brown Foundation, King Foundation, Texas Commission for the Arts, to name only a few of the 15 or so supporting agencies who have contributed generously through the years to ensure the legacy of the Odeon Theater in Mason, Texas.

from the President of the

The historic Odeon Theater in Mason, Texas, is the oldest operating theater in west Texas, having served the community and surrounding area since 1928. In 1994, it was purchased by a non-profit whose mission is to provide entertainment and cultural opportunities for Mason County and area residents and visitors. Since then, the Odeon has acquired state-of-the-art movie, sound and stage lighting equipment, presenting first-run movies and live entertainment to attendees from across the nation. The Odeon Theater celebrated its 90th Anniversary in 2018 by screening the first film ever shown there- the now famous Metropolis! Also, we were able to add a backstage annex with green rooms to the building behind the stage are for our entertainers and future community purposes. New seating is planned in the near future. It has become a reliable and important venue in its service to several surrounding counties by bringing quality entertainment that would otherwise not readily occur.

The Fourth Annual Chamber Music Festival, featuring the Artisan Quartet of Austin, Texas, fulfills our mission in a vital way, bringing classical music to our community, a privilege typically reserved for big cities only. The Odeon Theater is proud to host this 4-day festival and urges everyone to take advantage of this rare and enriching opportunity.